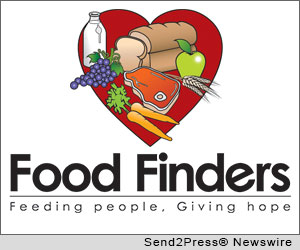 SIGNAL HILL, Calif., April 19, 2013 (SEND2PRESS NEWSWIRE) — Food Finders, Inc. of Signal Hill, California, is pleased to announce it is a recipient of Neotrope’s 2013 J.L. Simmons NonProfit PR Grant award. With this commitment, Neotrope(R) will assist with Food Finders’ mission to redistribute food donated by the regional hospitality industry and local grocers to feed those who are food insecure.

“Food Finders is a multi-regional nonprofit organization with a mission to eliminate hunger in our local communities,” shared Patti Larson, Executive Director of Food Finders, Inc. in Signal Hill, Calif. “Neotrope/Send2Press will support our effort to increase awareness of what we do, encouraging community businesses such as hotels, caterers, banquet rooms, restaurants and more – along with local residents – to ensure that no food gets wasted, but rather donated to feed those less fortunate.”

April also coincides with Food Finder’s 24th Anniversary of doing food rescue/hunger relief. “We’re excited to hit that mark, and are on goal to collect 7.3 million pounds of food in 2013,” adds Larson.

As part of this in-kind grant program, Neotrope is providing public relations (PR) solutions, news dissemination (through its Send2Press(R) Newswire service), online advertising, and social media marketing for Food Finders, Inc. This program is intended to help raise awareness of the 501(c)3 non-profit to traditional media, to the public, as well as potential sponsors and donors, regarding their efforts in distributing food directly to more than 200 missions, shelters and social service agencies to feed the needy and impoverished.

“We’re honored in providing assistance for Food Finders,” said Neotrope CEO, Christopher Laird Simmons; a member of PRSA and ASCAP. “Their efforts fill a notable need in local communities where daily hunger is still a desperate problem for some, and not just the homeless. Food Finders uses the term ‘food insecure’ and this need can equally apply to families who are ‘under employed’ which is a growing segment of the U.S. population not being well addressed by the Federal or State agencies. Food Finders’ mission is one of the most admirable in finding and rescuing food to redistribute to those needing it most, and we truly look forward to helping them raise awareness and engagement for their efforts.”

Food Finders is a community-based food rescue organization, founded in 1989, that serves as a conduit for food, education, and awareness between donors, volunteers, agencies and people in need. Its vision is to eliminate hunger and food waste, while improving nutrition in the communities we serve.

Headquartered in Signal Hill, Calif. (in Los Angeles county), Food Finders picks up donated food from hundreds of local grocery stores, bakeries, restaurants and produce markets and distributes it directly to more than 200 missions, shelters and social service agencies to feed the needy and impoverished.

Food Finders also helps merchants comply with the California Waste Management law, requiring them to cut their waste by 50 percent, and more recently mandated, 75 percent. Instead of going to landfills, the wholesome, consumable food is being used to feed hungry children and adults.

Since 1983 Neotrope(R) has delivered services to raise organization awareness including brand identity, marketing, public relations (PR), and SEO services. Neotrope is also an entertainment publishing company involved in books, music, software, and online magazines. The company pioneered the concept of search optimization of press release content back in 1997 and has been at the forefront of many communication and technology movements for three decades. Neotrope was an Inc. 5000 company in 2009. More information: http://www.Neotrope.com/ .

About the Non-Profit PR Grants:

For 2013, the Grant has been named after the company co-founder, the late Dr. J.L. Simmons, PhD, who passed away in 2003. Henceforth the Neotrope PR Grants will be known as the “J.L. Simmons Non-Profit PR Grant.”

Additional information regarding the Neotrope 2013 J.L. Simmons Non-Profit PR Grant program for U.S. charitable non-profits and grant recipients can be found at: https://www.send2press.com/non-profit/ and also https://prgrants.com/ .